A link budget is an accounting of all of the gains and losses from the transmitter to the receiver in a communication system. Link budgets describe one direction of the wireless link. Most communications systems are bidirectional, so there must be a separate uplink and downlink budget. The “result” of the link budget will tell you roughly how much SNR you should expect to have at your receiver. Further analysis would be needed to check if that SNR is high enough for your application.

You study link budgets not for the purpose of being able to actually make a link budget for some situation, but to learn, and develop a system-layer point of view of wireless communications.

Below shows the most basic diagram of a generic wireless link. In this chapter we will focus on one direction, i.e. from a transmitter (Tx) to receiver (Rx). For a given system, we know the transmit power, it is usually a setting in the transmitter, so how do we figure out the received power at the receiver?

Transmit and receive antenna gains are very important, the numbers will be in dB (unit-less). Typically, antennas are either omnidirectional or directional. If they are omnidirectional their gain will be 0 dB to 3 dB. A directional antenna can have a gain anywhere up to 50 dB or so.

When a directional antenna is used, it must be either:

Omnidirectional antennas are used when pointing in the right direction is not possible, like your cellphone and laptop. In 5G, phones can operate in the higher frequency bands like 28 GHz (Verizon) and 39 GHz (AT&T) using an array of antennas and electronic beam steering.

In a link budget, we must assume that any directional antenna, whether transmit or receive, is pointed in the right direction. If it’s not pointed correctly then our link budget won’t be accurate and there could be loss of comms (e.g. satellite dish on your roof gets hit by basketball and moves). In general, our link budgets assume ideal circumstances, but then add a miscellaneous loss to account for real-world factors.

As a signal moves through the air (or vacuum), it will reduce in strength. Imagine holding a small solar panel up in front of a light bulb. The further away the solar panel is, the less energy it will absorb from the light bulb. Flux is a term in physics and mathematics, defined as “how much stuff goes through your thing”. For us, it’s the amount of electromagnetic field passing into our receive antenna. We want to know how much power is lost, for a given distance.

Free Space Path Loss (FSPL) tells us the path loss when there are no obstacles, for a given distance. In its general form,

. Google Friis transmission formula for more info. For generating link budgets, we can use this same equation but converted to dB:

is in meters and is the distance between the transmitter and receiver.

is in Hz and is the carrier frequency. In link budgets it will show up in dB, unit-less because it is a loss.

There’s only one problem with this simple equation; we won’t always have free space between the transmitter and receiver. E.g. indoors there is a lot of bouncing (most frequencies can go through walls, just not metal or thick masonry). For these situations there are various non-free-space models. A common one for cities and suburban areas (e.g. cellular) is the Okumura–Hata model:

is the path loss in dB,

is the height of the transmit antenna above ground level in meters,

is the carrier frequency in MHz,

is the distance between Tx and Rx in km, and

is called the “antenna high correction factor” and it’s defined based on the size of city and carrier frequency range:

is the height of the receiving antenna above ground level in meters. Don’t worry if the above Okumura–Hata model seemed confusing, it is mainly shown here to demonstrate how non-free-space path loss models are much more complicated than our simple FSPL equation. The final result of any of these models is a single number we can use for the path loss portion of our link budget. We’ll stick to using FSPL for the rest of this chapter.

In our link budget we also want to take into account miscellaneous losses. We will just lump these together into one term, usually somewhere between 1 – 3 dB. Examples of misc. losses:

The plot below shows atmospheric loss in dB/km, over frequency (we will usually be < 40 GHz). If you take some time to understand the y-axis you’ll see that short range communications below 40 GHz, that are less than 1 km, have 1 dB or less of atmospheric loss, and thus we can usually ignore it. When atmospheric loss really comes into play is with satellite communications, where the signal has to travel many km through the air. Now it’s time to put all of these gains and losses together, to calculate our signal power at the receiver,

Overall it’s a pretty simple equation, we are just adding up gains/losses, some might not even consider it an equation at all. We usually show it in a table, similar to accounting, like this:

Now is a good time to talk about where noise enters our comms link. Answer: At the receiver! The signal is not corrupted with noise until we go to receive it. This is extremely important to understand, many students don’t quite internalize it, and end up making a foolish error as a result. There is not noise floating around us in the air, the noise comes from the fact that our receiver has an amplifier and other electronics that are not perfect and not at 0 degrees kelvin.

A popular and simple formulation for the noise budget uses the “kTB” approach:

Multiplying out (or adding in dB) kTB gives our noise power, i.e. the bottom term of SNR

Now that we have both numbers, we can take the ratio to find SNR:

We typically shoot for an SNR > 10 dB, although it really depends on the application. In practice, SNR can be verified by looking at the FFT of the received signal, or just calculating the power with and without the signal present (recall variance = power). The higher the SNR, the more bits per symbol you can manage without too many errors.

Automatic Dependent Surveillance-Broadcast (ADS-B) is a technology used by aircraft to broadcast signals that share their position and other status with air traffic control ground stations as well as other aircraft. ADS–B is automatic in that it requires no pilot or external input; it depends on data from the aircraft’s navigation system and other computers. The messages are not encrypted (yay!). ADS–B equipment is currently mandatory in portions of Australian airspace, while the United States requires some aircraft to be equipped, depending on the size. 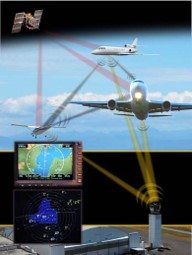 The Physical (PHY) Layer of ADS-B has the following characteristics:

The path loss depends on how far away the aircraft is from our receiver. As an example, it’s about 30 km between University of Maryland (where the course that this textbook’s content originated from was taught) and BWI airport. Let’s calculate FSPL for that distance and our frequency of 1,090 MHz:

Another option is to leave

as a variable in the link budget and figure out how far away we can hear signals based on a required SNR.

Now because we definitely won’t have free space, let’s add another 3 dB of miscellaneous loss. We will make the miscellaneous loss 6 dB total, to take into account our antenna not being well matched, and cable/connector losses. Given all of this criteria, our signal link budget looks like:

For our noise budget:

Therefore our SNR is -105.7 - (-156.8) = 51.1 dB. It’s not surprising this is a huge number, considering we are claiming to only be 30 km from the aircraft under free space. If ADS-B signals couldn’t reach 30 km then ADS-B wouldn’t be a very effective system, no one would hear each other until they were very close. Under this example we can easily decode the signals; PPM modulation is fairly robust and does not require that high an SNR. What’s difficult is when you try to receive ADS-B while inside a classroom, with an antenna that is very poorly matched, and a strong FM radio station nearby causing interference. Those factors could easily lead to 20-30 dB of losses.

This example was really just a back-of-the-envelope calculation, but it demonstrated the basics of creating a link budget and understanding the important parameters of a comms link.