In this chapter we will discuss actually transmitting data! We will design signals that convey “information”, i.e., 1’s and 0’s. The main goal of modulation is to squeeze as much data into the least amount of spectrum possible. Technically speaking we want to maximize “spectral efficiency” in units bits/sec/Hz. Transmitting 1’s and 0’s faster will increase the bandwidth of our signal (recall Fourier properties), which means more spectrum is used. We will also examine other techniques besides transmitting faster. There will be many trade-offs when deciding how to modulate, but there will also be room for creativity.

Term alert! Our transmit signal is going to be made up of “symbols”. Each symbol will carry some number of bits of information, and we will transmit symbols back to back, thousands or even millions in a row.

As a simplified example, let’s say we have a wire and are sending 1’s and 0’s using high and low voltage levels. A symbol is one of those 1’s or 0’s:

In the above example each symbol represents one bit. How can we convey more than one bit per symbol? Let’s study the signals that travel down Ethernet cables, which is defined in an IEEE standard called IEEE 802.3 1000BASE-T. The common operating mode of ethernet uses a 4-level amplitude modulation (2 bits per symbol) with 8 ns symbols.

Take a moment to try to answer these questions:

Question: Why can’t we directly transmit the ethernet signal shown in the figure above? There are many reasons, the biggest two being:

What we do for wireless signals is start with a carrier, which is just a sinusoid. E.g., FM radio uses a carrier like 101.1 MHz or 100.3 MHz. We modulate that carrier in some way (there are many). For FM radio it’s an analog modulation, not digital, but it’s the same concept as digital modulation.

In what ways can we modulate the carrier? Another way to ask the same question: what are the different properties of a sinusoid?

We can modulate our data onto a carrier by modifying any one (or more) of these three.

Amplitude Shift Keying (ASK) is the first digital modulation scheme we will discuss because amplitude modulation is the simplest to visualize of the three sinusoid properties. We literally modulate the amplitude of the carrier. Here is an example of 2-level ASK, called 2-ASK:

Note how the average value is zero; we always prefer this whenever possible.

We can use more than two levels, allowing for more bits per symbol. Below shows an example of 4-ASK. In this case each symbol carries 2 bits of information.

Question: How many symbols are shown in the signal snippet above? How many bits are represented total?

How do we actually create this signal digitally, through code? All we have to do is create a vector with N samples per symbol, then multiply that vector by a sinusoid. This modulates the signal onto a carrier (the sinusoid acts as that carrier). The example below shows 2-ASK with 10 samples per symbol.

The top plot shows the discrete samples represented by red dots, i.e., our digital signal. The bottom plot shows what the resulting modulated signal looks like, which could be transmitted over the air. In real systems, the frequency of the carrier is usually much much higher than the rate the symbols are changing. In this example there are only three cycles of the sinusoid in each symbol, but in practice there may be thousands, depending on how high in the spectrum the signal is being transmitted.

Now let’s consider modulating the phase in a similar manner as we did with the amplitude. The simplest form is Binary PSK, a.k.a. BPSK, where there are two levels of phase:

It’s not very fun to look at plots like this:

Instead we usually represent the phase in the complex plane.

You have seen IQ plots before in the complex numbers subsection of the IQ Sampling chapter, but now we will use them in a new and fun way. For a given symbol, we can show the amplitude and phase on an IQ plot. For the BPSK example we said we had phases of 0 and 180 degrees. Let’s plot those two points on the IQ plot. We will assume a magnitude of 1. In practice it doesn’t really matter what magnitude you use; a higher value means a higher power signal, but you can also just increase the amplifier gain instead. 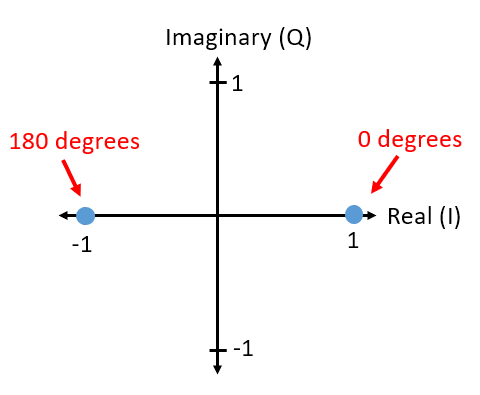 To receive and decode BPSK we can use IQ sampling, like we learned about last chapter, and examine where the points end up on the IQ plot. However, there will be a random phase rotation due to the wireless channel because the signal will have some random delay as it passes through the air between antennas. The random phase rotation can be reversed using various methods we will learn about later. Here is an example of a few different ways that BPSK signal might show up at the receiver (this does not include noise):

Back to PSK. What if we want four different levels of phase? I.e., 0, 90, 180, and 270 degrees. In this case it would be represented like so on the IQ plot, and it forms a modulation scheme we call Quadrature Phase Shift Keying (QPSK):

For PSK we always have N different phases, equally spaced around 360 degrees for best results. We often show the unit circle to emphasize that all points have the same magnitude:

Question: What’s wrong with using a PSK scheme like the one in the below image? Is it a valid PSK modulation scheme? 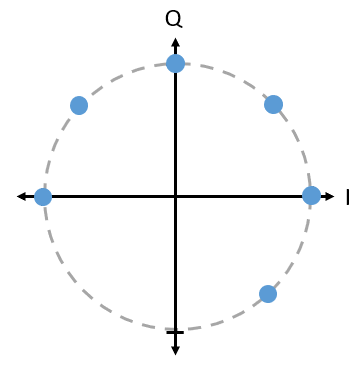 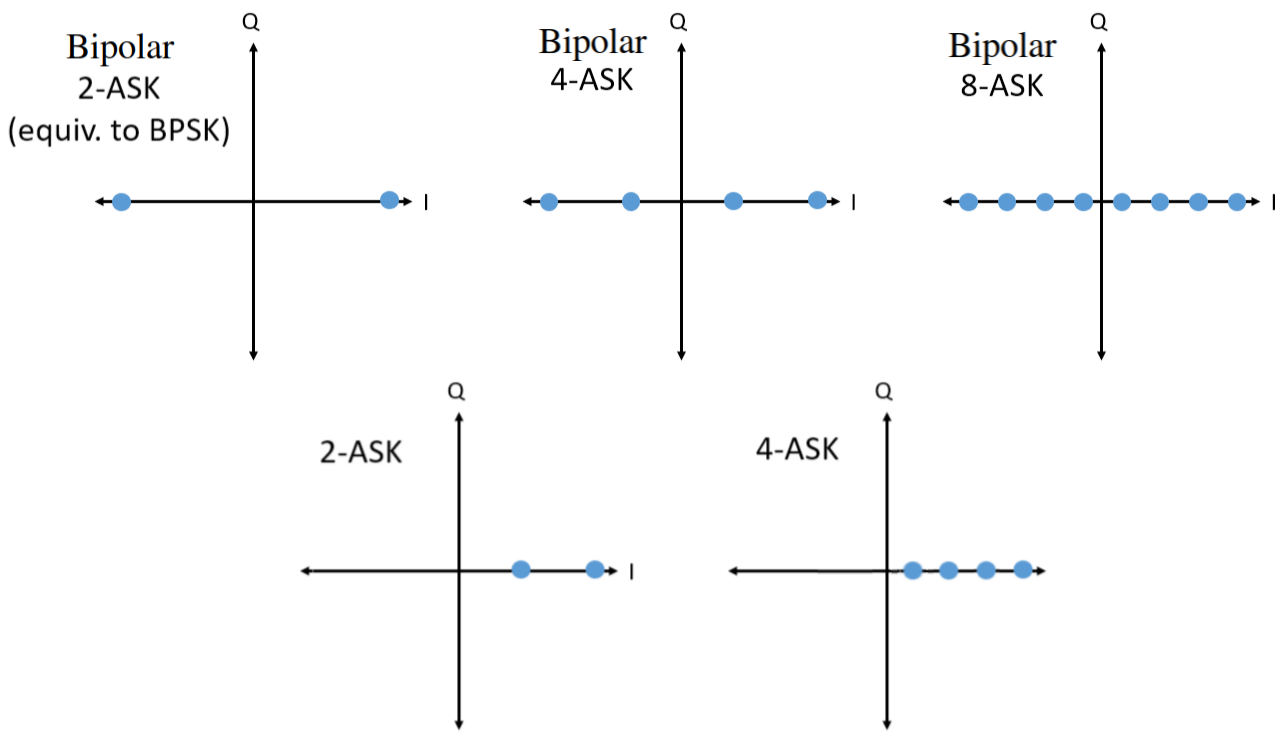 As you may have noticed, bipolar 2-ASK and BPSK are the same. A 180 degree phase shift is the same as multiplying the sinusoid by -1. We call it BPSK, probably because PSK is used way more than ASK.

What if we combine ASK and PSK? We call this modulation scheme Quadrature Amplitude Modulation (QAM). QAM usually looks something like this: 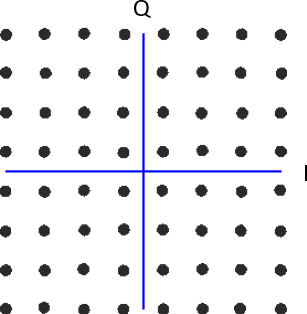 Here are some other examples of QAM:

For a QAM modulation scheme, we can technically put points wherever we want to on the IQ plot since the phase and amplitude are modulated. The “parameters” of a given QAM scheme are best defined by showing the QAM constellation. Alternatively, you may list the I and Q values for each point, like below for QPSK: 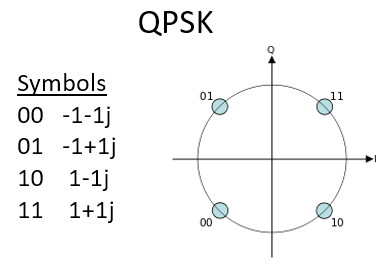 Note that most modulation schemes, except the various ASKs and BPSK, are pretty hard to “see” in the time domain. To prove my point, here is an example of QAM in time domain. Can you distinguish between the phase of each symbol in the below image? It’s tough.

Last on the list is Frequency Shift Keying (FSK). FSK is fairly simple to understand–we just shift between N frequencies where each frequency is one possible symbol. However, because we are modulating a carrier, it’s really our carrier frequency +/- these N frequencies. E.g.. we might be at a carrier of 1.2 GHz and shift between these four frequencies:

The example above would be 4-FSK, and there would be two bits per symbol. A 4-FSK signal in the frequency domain might look something like this:

If you use FSK, you must ask a critical question: What should the spacing between frequencies be? We often denote this spacing as

in Hz. We want to avoid overlap in the frequency domain, so

must be large enough. The width of each carrier in frequency is a function of our symbol rate. More symbols per second means shorter symbols, which means wider bandwidth (recall the inverse relationship between time and frequency scaling). The faster we transmit symbols, the wider each carrier will get, and consequently the larger we have to make

to avoid overlapping carriers. We won’t go into any more details about the design of FSK in this textbook.

IQ plots can’t be used to show different frequencies. They show magnitude and phase. While it is possible to show FSK in the time domain, any more than 2 frequencies makes it difficult to distinguish between symbols:

As an aside, note that FM radio uses Frequency Modulation (FM) which is like an analog version of FSK. Instead of having discrete frequencies we jump between, FM radio uses a continuous audio signal to modulate the frequency of the carrier. Below is an example of FM and AM modulation where the “signal” at the top is the audio signal being modulated onto to the carrier.

In this textbook we are mainly concerned about digital forms of modulation.

As a short Python example, let’s generate QPSK at baseband and plot the constellation.

Even though we could generate the complex symbols directly, let’s start from the knowledge that QPSK has four symbols at 90-degree intervals around the unit circle. We will use 45, 135, 225, and 315 degrees for our points. First we will generate random numbers between 0 and 3 and perform math to get the degrees we want before converting to radians.

Observe how all the symbols we generated overlap. There’s no noise so the symbols all have the same value. Let’s add some noise:

Consider how additive white Gaussian noise (AGWN) produces a uniform spread around each point in the constellation. If there’s too much noise then symbols start passing the boundary (the four quadrants) and will be interpreted by the receiver as an incorrect symbol. Try increasing noise_power until that happens.

For those interested in simulating phase noise, which could result from phase jitter within the local oscillator (LO), replace the r with:

You could even combine phase noise with AWGN to get the full experience:

We’re going to stop at this point. If we wanted to see what the QPSK signal looked like in the time domain, we would need to generate multiple samples per symbol (in this exercise we just did 1 sample per symbol). You will learn why you need to generate multiple samples per symbol once we discuss pulse shaping. The Python exercise in the Pulse Shaping chapter will continue where we left off here.