In all our previous Python examples we stored signals as 1D NumPy arrays of type “complex float”. In this chapter we learn how signals can be stored to a file and then read back into Python, as well as introduce the SigMF standard. Storing signal data in a file is extremely useful; you may want to record a signal to a file in order to manually analyze it offline, or share it with a colleague, or build a whole dataset.

Recall that a digital signal at baseband is a sequence of complex numbers.

When we want to save complex numbers to a file, we save them in the format IQIQIQIQIQIQIQIQ. I.e., we store a bunch of floats in a row, and when we read them back we must separate them back into [I+jQ, I+jQ, …].

While it’s possible to store the complex numbers in a text file or csv file, we prefer to save them in what’s called a “binary file” to save space. At high sample rates your signal recordings could easily be multiple GB, and we want to be as memory efficient as possible. If you have ever opened a file in a text editor and it looked incomprehensible like the screenshot below, it was probably binary. Binary files contain a series of bytes, and you have to keep track of the format yourself. Binary files are the most efficient way to store data, assuming all possible compression has been performed. Because our signals usually appear like a random sequence of floats, we typically do not attempt to compress the data. Binary files are used for plenty of other things, e.g., compiled programs (called “binaries”). When used to save signals, we call them binary “IQ files”, utilizing the file extension .iq.

In Python, and numpy specifically, we use the tofile() function to store a numpy array to a file. Here is a short example of creating a simple BPSK signal plus noise and saving it to a file in the same directory we ran our script from:

Now examine the details of the file produced and check how many bytes it is. It should be num_symbols * 8 because we used np.complex64, which is 8 bytes per sample, 4 bytes per float (2 floats per sample).

Using a new Python script, we can read in this file using np.fromfile(), like so:

A big mistake is to forget to tell np.fromfile() the file format. Binary files don’t include any information about their format. By default, np.fromfile() assumes it is reading in an array of float64s.

Most other languages have methods to read in binary files, e.g., in MATLAB you can use fread(). For visually analyzing an RF file see the section below.

If you ever find yourself dealing with int16’s (a.k.a. short ints), or any other datatype that numpy doesn’t have a complex equivalent for, you will be forced to read the samples in as real, even if they are actually complex. The trick is to read them as real, but then interleave them back into the IQIQIQ… format yourself, a couple different ways of doing this are shown below:

Although we learned how to create our own spectrogram plot in the Frequency Domain Chapter, nothing beats using an already created piece of software, and when it comes to analyzing a long RF recording, I recommend using inspectrum. Inspectrum is a fairly simple but powerful graphical tool for scanning through an RF file visually, with fine control over the colormap range and FFT size (zoom amount). You can hold alt and use the scrollwheel to shift through time. It has optional cursors to measure the delta-time between two bursts of energy, and the ability to export a slice of the RF file into a new file. For installation on Debian-based platforms such as Ubuntu, use the following commands:

When receiving samples off a SDR it’s important to know the maximum sample value. Many SDRs will output the samples as floats using a maximum value of 1.0 and minimum value of -1.0. Other SDRs will give you samples as integers, usually 16-bit, in which case the max and min values will be +32767 and -32768 (unless otherwise specified), and you can choose to divide by 32,768 to convert them to floats from -1.0 to 1.0. The reason to be aware of the maximum value for your SDR is due to saturation: when receiving an extremely loud signal (or if the gain is set too high), the receiver will “saturate” and it will truncate the high values to whatever the maximum sample value is. The ADCs on our SDRs have a limited number of bits. When making an SDR app it’s wise to always be checking for saturation, and when it happens you should indicate it somehow.

A signal that is saturated will look choppy in the time domain, like this: 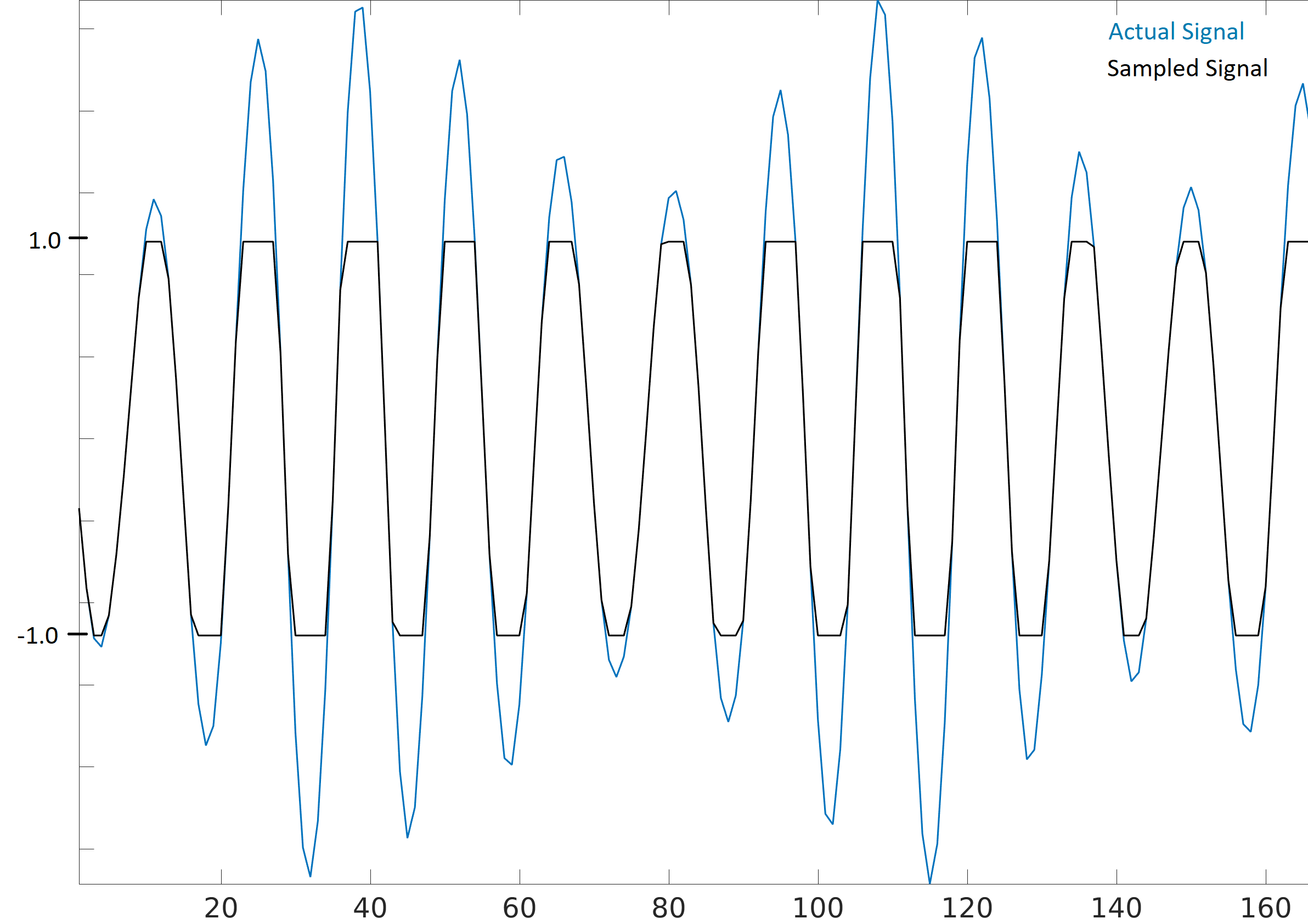 Because of the sudden changes in time domain, due to the truncation, the frequency domain might look smeared. In other words, the frequency domain will include false features; features that resulted from the saturation and are not actually part of the signal, which can throw people off when analyzing a signal.

Since the IQ file itself doesn’t have any metadata associated with it, it’s common to have a 2nd file, containing information about the signal, with the same filename but a .txt or other file extension. This should at a minimum include the sample rate used to collect the signal, and the frequency to which the SDR was tuned. After analyzing the signal, the metadata file could include information about sample ranges of interesting features, such as bursts of energy. The sample index is simply an integer that starts at 0 and increments every complex sample. If you knew that there was energy from sample 492342 to 528492, then you could read in the file and pull out that portion of the array: samples[492342:528493].

Luckily, there is now an open standard that specifies a metadata format used to describe signal recordings, known as SigMF. By using an open standard like SigMF, multiple parties can share RF recordings more easily, and use different tools to operate on the same datasets. It also prevents “bitrot” of RF datasets where details of the capture are lost over time due to details of the recording not being collocated with the recording itself.

The most simple (and minimal) way to use the SigMF standard to describe a binary IQ file you have created is to rename the .iq file to .sigmf-data and create a new file with the same name but .sigmf-meta extension, and make sure the datatype field in the meta file matches the binary format of your data file. This meta file is a plaintext file filled with json, so you can simply open it with a text editor and fill it out manually (later we will discuss doing this programmatically). Here is an example .sigmf-meta file you can use as a template:

Note the core:cf32_le indicates your .sigmf-data is of type IQIQIQIQ… with 32-bit floats, i.e., np.complex64 like we used previously. Reference the specifications for other available datatypes, such as if you have real data instead of complex, or are using 16-bit integers instead of floats to save space.

Aside from datatype, the most important lines to fill out are core:sample_rate and core:frequency. It is good practice to also enter information about the hardware (core:hw) used to capture the recording, such as the SDR type and antenna, as well as a description of what is known about the signal(s) in the recording in core:description. The core:version is simply the version of the SigMF standard being used at the time the metadata file was created.

If you are capturing your RF recording from within Python, e.g., using the Python API for your SDR, then you can avoid having to manually create these metadata files by using the SigMF Python package. This can be installed on an Ubuntu/Debian based OS as follows:

The Python code to write the .sigmf-meta file for the example towards the beginning of this chapter, where we saved bpsk_in_noise.iq, is shown below:

Simply replace 8000000 and 915000000 with the variables you used to store sample rate and center frequency respectively.

A little bonus for those who read this far; the SigMF logo is actually stored as a SigMF recording itself, and when the signal is plotted as a constellation (IQ plot) over time, it produces the following animation:

The Python code used to read in the logo file (located here) and produce the animated gif above is shown below, for those curious: